“There is something rejuvenating about Big Bash, watching friends reunite; sometimes having not seen each other in 50 years, literally,” said Director of Alumni Relations Steve Hoffman ‘85. “The rigor and cohesiveness of this place creates a bond among young men who go through it together. And that bond continues regardless of the length of time between gatherings, whether it’s 50 days or 50 years.” 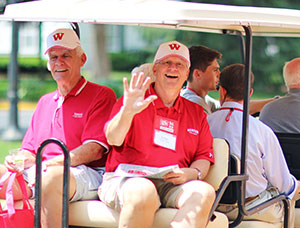 Friday’s 50-year reunion is the lasting Big Bash highlight and occurs during the Friday evening banquet. President Gregory D. Hess presents each 1968 graduate in attendance with a reunion medallion. The class gave back in a big way by presenting a record-setting class gift of $10.6 million from 98 donors. That gift topped the previous record of a $9.6 million gift by the Class of 1967 last year.

Before accepting the gift, President Gregory D. Hess said to the attendees Friday evening, “Take a moment to think about yourself before you came to Wabash. Not only did this place educate you, it brought out the best in you. Wabash set the standard and the course for your life. Whether you graduated 10 years ago or 50 years ago, you are what you have always been when you left this campus. You are Wabash men.”

“The symposium is a fantastic showcase of our all-star faculty to our alumni,” said Hoffman. “To alumni, the greatest faculty were the ones that were here when they attended, no matter when that was. It’s nice for them to see our faculty doing what they do best…engaging with generations of Wabash men.”

Saturday opened with a morning fun run and walk, a bike tour through Montgomery County, campus tours, more colloquia, and the legendary Alumni Chapel Sing in the Chapel. Each class held individual Saturday night dinners at locations throughout campus.

Colloquia were presented Saturday by alumni, featuring Dr. David Cook ’68: “Who Knew Health Care Could Be So Complicated?” Garrard McClendon ’88: From Professor to Filmmaker;” Jim Dashiell ’68: “One Trail, Many Paths;” and Steve Woods ’93: “My Rookie Season as an NFL Official.”

The 2018 reunion closed Sunday with the Big Bash Awards Brunch. The Class of 1968 accepted the majority of the awards including the 1928 Attendance Award, the 1909 Trophy Cup, the Robinson-Reagan Award for Chapel Sing, and the Edmund O. Hovey Award for giving. The Class of 2008 received the Class of 2007 Award and Class Agents Jim Roper '68 and Jim Millikin '68 were awarded the Dorman Hughes award for outstanding class agent.

At the conclusion of the event, President Hess reminded the remaining reunion attendees of three gifts the College gave them: 1. an exceptional, student-focused liberal arts education, 2. outstanding teacher-scholars in the classroom, and 3. the gift of each other -- the friends and family made at Wabash. Hess promised to continue to make Wabash a leader and pioneer in providing a timeless education in the liberal arts and timely opportunities for students and alumni to flourish in the world around them.

This week’s edition of the “Wabash On My Mind” podcast talks with former Director of Alumni and Parent Relations Tom Runge '71, who headed the first Big Bash Reunion Weekend in 2004. Topics include the advent of alumni chapel sing, the necessity of wives and partners at the event, and the all-important custom of signing the book. Just click the red play button inside the graphic to enjoy an audio preview. Big Bash 2018 Citizen Wally: A Symposium on Citizenship and the Liberal Arts