College students are at high risk of spreading flu viruses—living, eating, sleeping, playing, and studying together, day-in and day-out. Yet vaccination rates among Wabash students continues to be low every year. So, as part of their study of viruses and bacteria, Dr. Anne Bost and her microbiology class teamed up with Wabash College nurse, Chris Amidon, to re-evaluate how to best educate students on the importance of getting a flu vaccination.

“It is important to get the flu vaccination,” said biology professor Dr. Heidi Walsh.” “When a student gets the flu, they miss class, not to mention it is harder to concentrate when you are sick.” The flu negatively impacts attendance and performance causing sufferers to often miss eight or more days of class, work, or athletics. It also exposes others to the virus who may be more susceptible to higher risk impacts of flu, such as older individuals, children, or those who have a weak immune system. 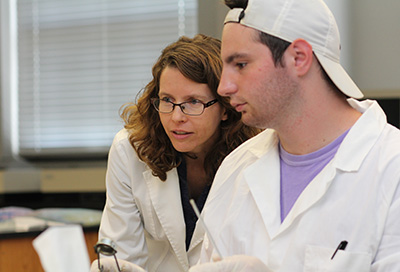 The students worked with Bost to gain insight into why so many students were not getting vaccinated by conducting a survey among Wabash students. “Many of the survey findings confirm what we already heard from students,” said microbiology student Michael Armbruster ’20.

The survey provided the class insight into the next steps to promote the vaccination on campus. While there is no one-size-fits-all solution that will increase vaccination rates among students, the group felt the College’s approach could be enhanced. They concluded that a combination of education and accessibility is most influential in getting college students to “think critically” about flu vaccination.

The Microbiology team worked with the Public Health Organization, the Global Health Initiative, and student leaders to share results of the survey and educate students on the common misconceptions surrounding the flu.

Based on vaccination rates during the first two flu shot clinics on campus, Amidon was pleased with the early results of the group’s efforts. “We gave over 400 flu shots, which doubled what was done in previous years,” Amidon said. “The highest number of vaccinations given during any year in the past was 216.”

“The flu shot works!” said Bost, who helped the students lead the effort. She sees this as a real-world application to her students’ learning about bacteria and viruses in class. “Our goal is to get the message out so the Wabash community can make an evidence-based decision about getting vaccinated, both to protect themselves and others around them. What better way to live humanely than to get the vaccine, doing your part to improve the health of our campus.”

Reminder: the final free flu shot clinic will be on Thursday, November 7 from 11-2 in Knowling Fieldhouse.