Commencement 2019: 'You Are Possibilities' Wabash College’s Commencement speakers, seniors Quinn Cavin and Jaleel Grandberry, invited classmates to write their own script and to impact others positively along life’s journey during its 181st ceremony Sunday.

Cavin and Grandberry were the featured speakers, per Wabash tradition, on an afternoon that celebrated the milestone by conferring degrees for 198 men of the Class of 2019 with diplomas from President Gregory D. Hess on a wet and chilly spring day on the College Mall.

Further, the College awarded honorary degrees to Mauri A. Ditzler ’75, President of Albion College, and Robert H. Johnson H’77, retired head coach of the College’s track and field and cross country teams and a leader within the Malcolm X Institute of Black Studies since its founding at Wabash during the exercises.

“Our spirits shine brightly as we celebrate the men of the Class of 2019,” said President Hess. “You have been teachers, learners, and listeners. You have grown and embodied the highest ideals of our Gentleman’s Rule. You have thrived under the many challenges you have faced, and you have emerged stronger for your perseverance, resilience, and courage.” 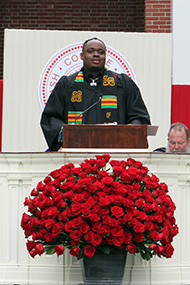 President Hess praised the graduates for their collective accomplishments in their time at the College, “We coaxed you to write your own story, to think, act, lead, and live. And you have written glorious chapters in the history of our great College.”

Grandberry used the words of Jackie Robinson – “A life is not important except in the impact it has on other lives” – to speak of the simple power of impact.

Cavin used the idea of stories and storytelling that highlight the bonds of culture and community.

“Stories can come in all shapes and sizes,” he said. “If they’re good, they’re never exactly what you expected. Stories are the foundation of culture and community – history and experience. They’re something we share. They evoke feeling and passion and carry knowledge. We crave this kind of cathar 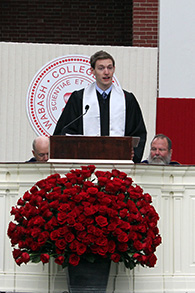 Cavin concluded by asking his classmates to be a story worth telling.

“You’ve been given an education and you have been tested and tried, and you bested it,” the theater and psychology major from Noblesville, Indiana, said. “Now the world is a blank canvas, a stage, your court. You are possibilities.”

Before ringing out the class with the bell Caleb Mills used to call the very first Wabash students to class, President Hess urged the Class of 2019 to “be generous to those who are standing outside your circle and bring them into yours.”

The day opened with a thoughtful Baccalaureate sermon, “Toward a New Heaven and Earth,” from the Rev. Dr. Jessicah Krey Duckworth, a program director for religion at Lilly Endowment Inc.

“As a class you have experienced the heartache of the death of a friend and the absence of another,” she said. “In large and small ways you have been called to embrace travails, some of which were known, many of which were unknown. It is likely that you have wiped away tears – of your own and of others. Or more likely, that you have stood alongside one another with total composure, holding on to one another with integrity and grace. Consider those moments when a professor opened a door to a new reality. Consider those moments when you celebrated a team win. Consider those moments that you argued out competing claims until the wee hours of the morning with your best friend. Consider those nights when you wanted to go to bed, but chose to push through and get the assignment finished. Consider all the little moments that led towards your formation as Wabash men.”