Kyle McAtee ’19 says that the ‘first manly decision’ he ever made was to attend the Wabash Liberal Arts Immersion Program the summer before his freshman year.

“It put a lot of things in perspective. It’s still hard to talk about, but it made me grow so much.”

Even though his new mindset includes taking time to sit back and listen to others, the rhetoric major admits he still really likes to talk. We sat down with him and asked him to reflect on his time at Wabash. Here are some of our favorite moments: 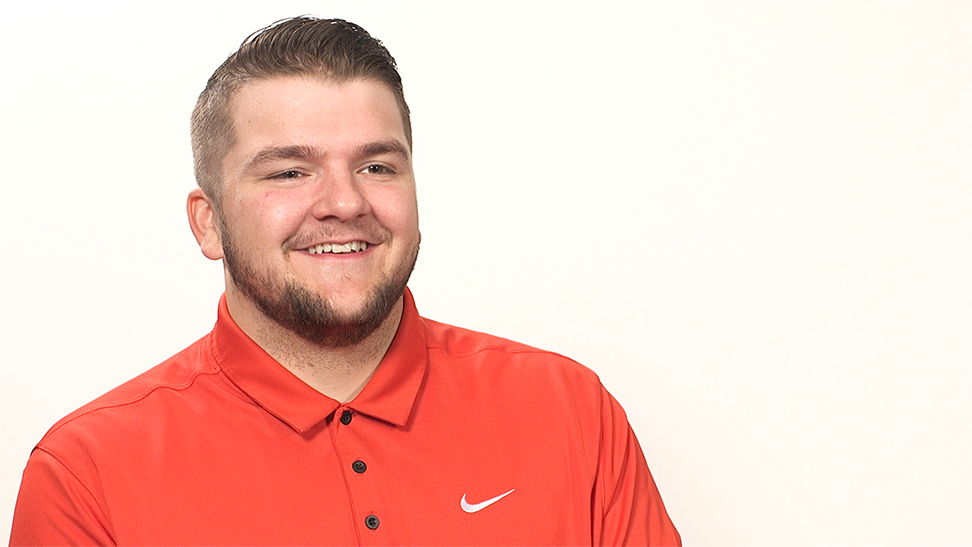 “We’re all kinda dumb when we’re young. That’s why we go to college.”

“When I came to college, I wanted to make a lot of money. But now I realize that the most important thing is finding some sort of happiness in what you’re doing. Not necessarily happiness in your job but happiness in your everyday life—in mowing your grass, in working out, in your time in the car, and in the relationships you have.”

“The things you say matter. It doesn’t matter if you’re a team captain or a third-string player, a CEO or the low man on the totem pole (like I’m about to be!) What you say matters to people. What you say has meaning. And the way you present yourself is very important.”

“Being good to people is really important—not just for them but for yourself.”

“As a captain and as a leader, you have to be strong. You have to be fair. You also have to be caring and compassionate. We didn’t win games this year through just grit and toughness. We won a lot of them through compassion, love, and togetherness.”

“‘Wabash Always Fights’ is an incredible slogan, and we should never get rid of it. But we didn’t do a lot of fighting this year. We really did a lot of loving and caring.”

On Being a Wabash Man:

“Being a Wabash man is being able to stand behind every decision you make. Hopefully through the education you’ve received here, it’s the right decision. It’s being compassionate and caring. It’s being open about the way you feel and the way you think, but also being open to what others think. And eventually, the main goal is to make a difference—in one person’s life, in a lot of people’s lives, in lives across the world—whatever your personal goal is. I think that’s really what it is.”