Wabash College has announced plans to construct a new football stadium that will open when the Little Giants host Rose-Hulman on September 5, 2020.

Wabash President Gregory Hess made the announcement of the $13 million Little Giant Stadium, which will include seating for 3,550 fans in the main grandstand, suites, and the W Club Lounge. The new facility will also include game operations and media booths, relocated scoreboard, a new playing surface, all-weather track, and expanded restroom and upgraded concession areas. Ground will be broken on Saturday, November 9.

“An anonymous group of donors has pledged substantial funding for the construction of Little Giant Stadium and we are grateful for their passion, enthusiasm, and commitment to our students,” President Hess said. “This project and a complete renovation of Lilly Library constitute phase one of our Campus Master Plan implementation.” 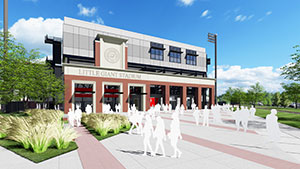 Wabash is the sixth-winningest football program in NCAA Division III. The Little Giants have posted a 166-34 record since 2001 (.830), won eight North Coast Athletic Conference Championships, and made the Division III Playoffs eight times over that span.

The College’s track and field team, which will compete in the stadium, has won 13 indoor and outdoor North Coast Athletic Conference Championships since 2011.

The new Little Giant Stadium is being designed by the DLR Group in Kansas City, which has a proven record of excellence in stadium design for more than 30 years. Indianapolis-based FA Wilhelm Construction will serve as the project’s construction manager.

“We could not be happier with the commitment of the donors and the excellence of our design and construction partners,” said President Hess. “DLR Group has a very deep bench and will hit our deadlines, and Wilhelm has done impressive work at Wabash for decades.” 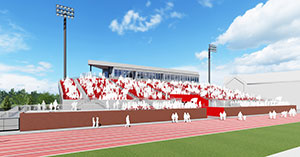 naming the playing field in his honor. Navarro coached the Little Giants from 1974 to 1977. His 1977 team posted an 11-2 record and advanced to the Amos Alonzo Stagg Bowl (the Division III National Championship game). The clock ran out on Wabash in a 39-36 shootout loss to Widener in the title game.

The new Little Giant Stadium will include four suites and the W Club Lounge on the second level, accessible via an elevator. Within the main concourse will be a Hall of Giants, which will pay tribute to Wabash’s accomplishments in intercollegiate athletics. 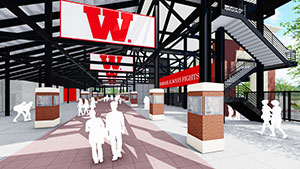 from now,” said head coach Don Morel. “Our players feel like we have the best fans in the country and this new stadium will further enhance our home field advantage.”

Gifts for the construction of Little Giant Stadium and renovation of Lilly Library are made possible through Wabash’s historic $225 million Giant Steps Campaign — the largest comprehensive fund-raising campaign in the College’s history. Contact the Wabash Advancement Office at (765) 361-6365 for more information.